Answering the Call to Priesthood

The Roman Catholic Womenpriests Program of Preparation is broad-based and includes the following areas: 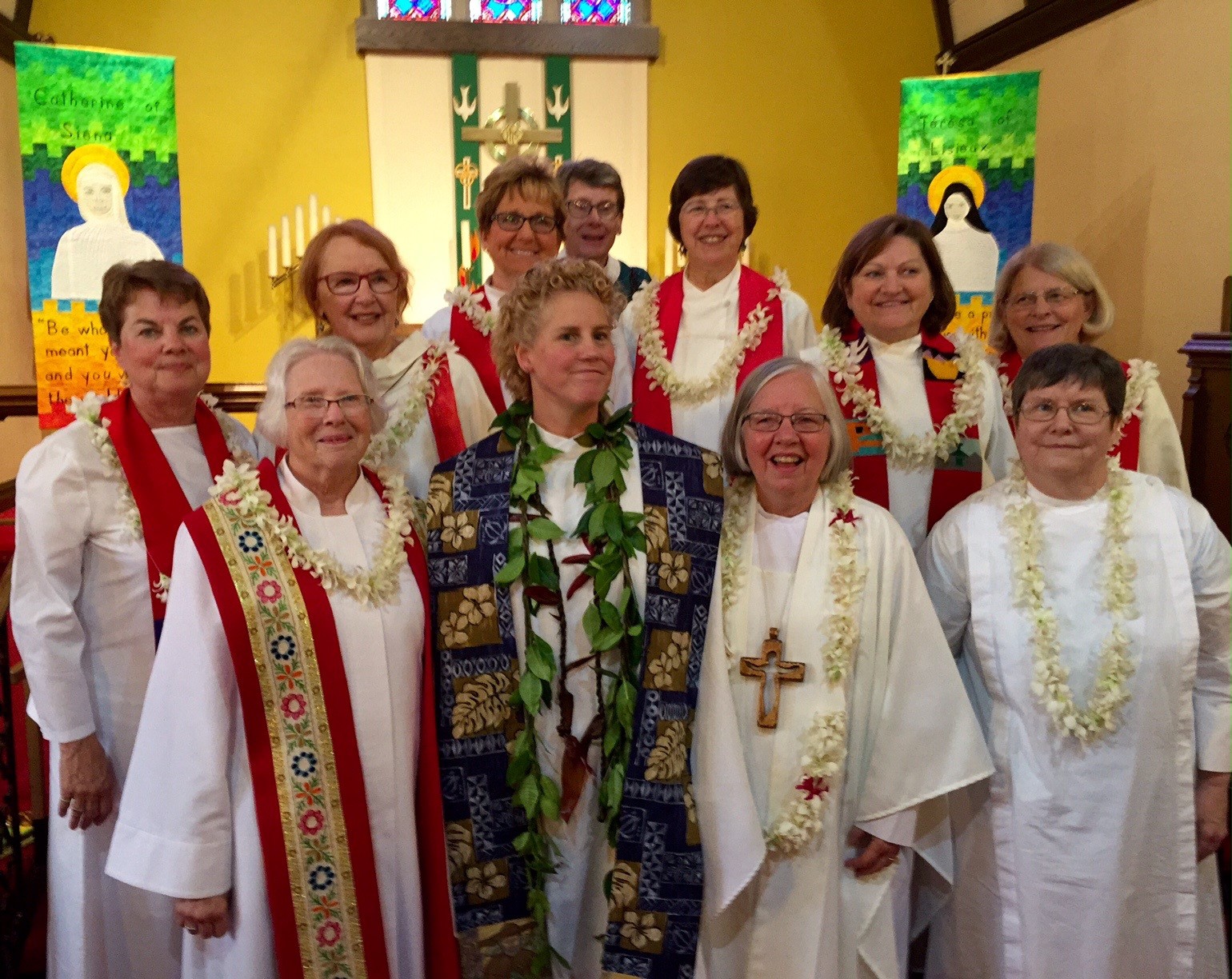 HOW HAVE THEIR LIVES CHANGED?
WOMEN ANSWERING THE CALL TO PRIESTHOOD

EW: Please describe your feelings when you first realized that you were finally an ordained priest.

Eileen: Our organization, Roman Catholic Womenpriests, had a retreat in a beautiful monastery not far from Pittsburgh, where I was going to be ordained in a couple of days. I spent quite a bit of time walking in the garden, thinking and praying. At one point in time, the wind began to blow really hard, right in the middle of a warm, sunny day. The wind blew so hard that I backed up against a wall, feeling the warm wind on my entire body. I recall saying, “Here I am Lord. I have heard you calling. I am ready.” This day prepared me for the ordination, which was a very humbling experience. I was aware of the historical importance of our ordination on the three rivers in Pittsburgh in 2006, but I was also aware of the fact that I stood on the shoulders of countless generations of wise, Spirit-filled women who had prepared the way for us. I continue to feel humbled.

EW: How has your ministry evolved over the past four years?

Eileen: I have long believed that “if we build it, they will come.” I truly believe that many people are interested in doing church in a more egalitarian fashion where there really isn’t a line between men and women, ordained and non-ordained. The community, St. Mary Magdalene, Drexel Hill, PA, has continued to blossom in ways that are very life-giving for all of us. We have grown appreciably over the last two years. We have a large contingent of people who come from Delaware and one couple who comes all the way from Albany, New York! We pray and worship together in an egalitarian fashion. We recognize the gifts of our members. All voices are heard without the need to measure their worth against an institutional standard. We are a community owned and operated by the People of God.

EW: What have been your most memorable moments?

Eileen: Just being together in prayer each and every week is memorable. Our growth and development has been so amazing. We have been a work in progress, a people on the move. It is remarkable what people will do when asked. They will preach, pray, plan, preside, and progress. Our community has also shared interfaith worship services with two United Methodist communities where we break bread together because we share one faith, one creed, and one baptism.

EW: What has been most challenging?

Eileen: For me it’s having enough time. All of us in RCWP are financially self-sustaining and (like the apostle Paul) many have other jobs that are our means of support. In many ways, this is a good thing, because we experience first hand the problems of functioning in the working world. I also take my job of preaching very seriously. It takes countess hours of prayer, scripture reading, and spiritual preparation to prepare a homily that resonates with the assembly. So time management is my most pressing challenge.

Eileen: Just being here. If you had asked me twenty years ago what I would be doing at age 58, I can assure you that I would not have answered being in ordained ministry. And yet, it is not surprising at all. Women’s paths tend to have a different user’s manual. Many of us, especially those of my generation were programmed to do only two things – get married or enter the convent. In the last 40 or so years, the scales of many types of prejudice have fallen from the eyes of many, awakening in them possibilities they could only dream about in their younger years. I have been so fortunate to live through the heady days of the civil rights movement which has changed the lives of so many people in a comparatively short time.

EW: Have you encountered resistance, criticism, or hostility? If so, how have you been able to deal with this?

Eileen: No one has challenged me face-to-face. That takes a great deal of courage that most critics don’t seem to have. It amazes me how some people feel compelled to throw email bombs or send letters to a complete stranger accusing them of all sorts of things without even knowing them or speaking to them personally. I’ve been “condemned to hell” on multiple occasions. My integrity as a person has been impugned. The cardinal archbishop of Philadelphia called me names in a letter he sent via special delivery, and the pope excommunicated all members of Roman Catholic Womenpriests in a public newspaper article. But the deepest cut I felt came from the pastor of the parish to which I belonged for 20 years, a man who baptized my two youngest children. He sent a member of the parish staff to my home asking me not to come to communion. So much for pastoral care! In the end, this is all really sad but I think their actions have hurt them more than they have injured me. I know that people sometimes react in uncharitable ways when their deeply held beliefs are challenged. Fear strikes at people’s hearts, making them behave in ways that are surprising to everyone. We all know that the love of God and the fellowship of the Holy Spirit can be lived out in more loving and merciful ways. There are far more people who act without fear and judgment who prove that this can be done. These are the people who give me sustenance.

EW: What do you see as the future for your own ministry? For women’s ordination in general?

Eileen: As Gamaliel, the rabbi said in Acts 5, if a movement is of God, no one can stop it. RCWP has grown from seven bold women ordained on the Danube River in Germany to over a 100 members worldwide. I think that women’s ordination will continue to grow, perhaps exponentially. No human being can put the lid on the Spirit. We now live in a 21st century world where the language of eminence of degree no longer makes sense, where we know, as scripture indicated so long ago, that God calls everyone to the presence of God and the breaking of the bread. We need to return to the biblical ideal of the discipleship of equals. The institutional church can no longer speak out of both sides of its mouth, demanding equal treatment of all people in the world while continuing to discriminate within the sacred walls of the church.

EW: Do you have any new insights, thoughts, or advice about women taking the route to ordination?

Eileen: As I said earlier, those of us who have been ordained stand on the shoulders of giants; women who have prepared the way for us at great cost to themselves. Those women were often ostracized and condemned by both society and the church. It’s less dangerous now because the church has no secular power to back up its ecclesiastical threats. However, women must know that if they work in any capacity in the church and pursue ordination, they will be fired. This is sad because it often precludes younger women from pursuing ordination. It is equally sad for the church as the People of God because they are deprived of a different vision and a new voice that might open them up to previously inaccessible insights in a modern world that takes equal rights seriously, however imperfectly it is implemented. Consequently, the Church lumbers on, handicapped by its refusal to acknowledge the life experiences of one half of its population.

While most of us in RCWP refuse to recognize and accept excommunication from the hands of the frail hierarchy, priesthood does not come without its slings and arrows. People once considered friends, often no longer have time for friends who are women priests. Men who passionately preached justice from the pulpit will not publicly support justice for ordained women. Some of our members have been cast out of prayer groups and other long- standing associations within their parishes. While there is support and love for those members of our Catholic communities who have committed heinous crimes, there is no such compassion for women priests. Yet, I wouldn’t change one thing that has happened. Amidst the hurts, the movement grows. Jesus promised us that ministry and discipleship would not be easy. Faith in God rather than fear of the unknown or of change moves us women priests forward. The Holy Spirit has not failed us yet. I trust She never will.